The focus of the Think Tank in 2012 and 2013:
Ahead of boom and crisis Make the controlling volatility-proof!

The Dream Car report of the Think Tank is available for free download:

Dream Car report of the Think Tank in the ICv in 2013:

Having projection on boom and crisis | To design controlling to withstand volatility!

The phenomenon of "volatility"

Volatility and the associated with it uncertainty and turbulent future is a regularly registered phenomenon. As early as in 1862, Abraham Lincoln spoke of "turbulent future". Peter Drucker published his famous work "Managing in turbulent times" in 1980.

Over the past few months, the Think Tank has begun to deal with the recent phenomenon of increasing volatility. Volatility is regarded as one of the ten future areas of controlling by both scientists and specialists and executives. The first goal of the efforts is to examine the thesis of increased volatility and to develop a definition of volatility that is suitable for controlling practice.

On the basis of this, we will investigate the possibilities of reacting to high volatility by the management of companies in theory or reactions that are already being used in practice. Since controlling is always also a decision-making support for management, a change in the management of the company always affects the controlling. The Think Tank will derive requirements for controlling in the increasingly volatile environment and use these to check and, if necessary, adjust existing controlling instruments and processes for usability in a volatile environment.

The term volatility is used in many fields. In general, volatility is the short-term fluctuation of a time series around its mean value or trend. Volatility in economics, in particular, is often used but not clearly defined.

For the coming work of the Think Tank in the ICV, we have found an initial definition for our work. We want to define volatility as the unpredictable fluctuation range and frequency of the external and internal economic parameters relevant for companies, which sequence patterns are not or hardly predictable.

This very broad definition includes many events. These include, for example, the volatility of commodity prices, the shift in demand and competitive positions, e.g. due to shorter product life cycles and technological change, as well as the strong economic fluctuations observed since the financial crisis in 2009.

Volatility, especially at company level, is often described as a subjective, qualitatively perceived phenomenon of accelerated change, without operationalizing the concept of volatility. In this context, the broad volatility concept favors a flattening of perceived effects. In order to be able to make a differentiated statement about the development of the volatility and influence on the controlling, it is necessary to examine the fluctuations of the different factors of the companies and to identify volatility indicators. The decisive factor is the company-specific analysis of relevant indicators and not the development of a standard measurement. 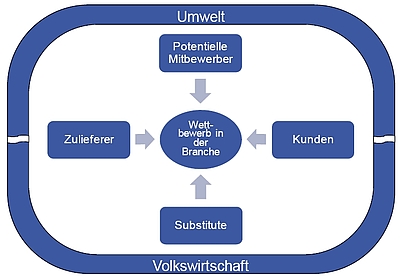 To this end, we consider an extension of Porter's "Five-Forces Model" to include influences from the environment and the economy as a "seven-strength model" of the volatility analysis (see figure). This is to characterize the influence and impact of company-specific volatility in order to have a differentiated impact on companies. The aim of the Think Tank is to derive company-specific indicators for volatility and to analyze the success effects of volatility changes.