Why do we address the issue of digitization?

The digitalization was much too long seen especially as a theme of the start ups of Silicon Valley. A rethinking began only after the first effects of disruptive changes could not be overlooked even in the core industries of so-called traditional companies. However, in many cases the scope and the speed of the changes are dramatically underestimated.

Against this backdrop, the newly established expert work group BI / Big Data and Controlling of the International Association of Controllers has set itself a goal to launch a "Digitalization Offensive".

Since then, more than 750 participants have joined the free, one-hour webinars. More than 100 participants decided to intensively deal with one of the main topics in a two-day "Digital Trial Room" (Business Innovation Lab) at the University of Applied Sciences Ludwigshafen. Nearly 30,000 interested parties were reached via mailings, the ICV website was called well over 12,000 times with the detailed information on the Offensive. In addition, ten publications were produced in cooperation with the members of the ICV expert work group "BI / Big Data and Controlling".

In 2019, this offensive will be further expanded together with the Controlling XING Ambassador Community! 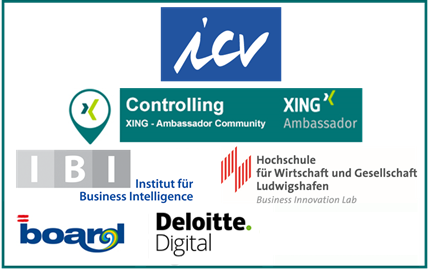 Motives and goals of the ICV Digitization Offensive

What exactly is the ICV Digitalization Offensive, which is being developed by the ICV expert work group, Prof. Dr. Andreas Seufert (expert work group BI / Big Data and Controlling as well as XING Ambassador Controlling) together with the partners Board, Deloitte digital und Woodmark? It is best to let the initiator speak for itself. See the short, but concise movie contributions:

Goal of the ICV Digitalization Offensive

What challenges do companies have to face in the digital age and what is the role of controlling?

How do we address the issue of digitalization?

The ICV Digitalization Offensive offers you theory and practice: getting to know each other, getting to know best practice and asking questions or deep immersion, developing your own scenarios and simulating new processes - everything is possible with the following formats: Webinars / Business Innovation Labs / Action Research. The details can be found on the page Dates.

Prepare for your Future!

Digitalization requires the development of adequate skills in controlling.

Very early, the ICV has recognized the signs of the times. Since 2013 it has described the consequences of the new developments with its "Dream Factory". The Dream Car reports "Volatility", "Big Data", "Business Analytics" are gaining attention beyond the controlling community. Currently, "Digital business model innovations and the role of the controller" are discussed.

With its annual Controller Congress the ICV continuously focuses digitalization topics: "Industrie 4.0 / Controlling 4.0", "Planning and Management in the Age of Digital Transformation" and "Agile Controlling in the Digital Reality" were Congess titles. The Congress 2018, "Controlling on the Move: questioning - rethinking - mind shift" focuses on new requirements for the finance function.

Varied are the initiatives of the ICV; like the "ICV Digitalization Offensive" of the expert work group "BI / Big Data and Controlling". There, the community can learn to understand the new dimensions and challenges, to actively address them and to push forward the implementation in the companies.

The ICV controllers are preparing for the future as business partners of the management. Take advantage of the opportunities!

You can also read about how the ICV, in addition to the ICV Digitization Offensive, helps to exploit the opportunities of digitization under the guideline "Prepare for your Future".